*picture above: playing dominoes with my friend (and partner for the game) Anthony

A few weeks ago, I went to a birthday party for my friend Anthony. Somehow I got the time mixed up (probably because I didn’t ask the right questions ahead of time) and arrived a good hour early to the party. There were a few other family members who had arrived early too – so Anthony suggested we sit down and play a game of dominoes.

Anthony and I were partners – we played against Andy and LaVelle. I sat down and pretended like I knew what I was doing. But here’s the thing: I have never played dominoes in my life. I had zero knowledge of the rules. I sat and pretended, copied, and stumbled my way through two games.

And I made my team lose. Why? Because I didn’t ask questions.

I’ve talked with a friend before about longing for safe places where anything can be discussed, asked, questioned. For whatever reason, I don’t feel like I have safe places (or relationships) where I can go with my ideas, thoughts, opinions, or questions and be honest, I mean completely honest – as in, holding nothing back.

The concept I was pitching to my friend was something like this: wouldn’t it be cool if we could gather a diverse collective of ministry people – Catholics and Pentecostals and Lutherans and Charismatics and Presbyterians and… we sat with one another, willing to openly and honestly talk about anything—with no fear of judgment or labeling or dismissal.

Why are we so threatened by questions? Have we lost the art of conversation?

(a quick side note: I’ve read some brief David Dark quotes before, but just recently stumbled across his piece for MTV on Chance the Rapper, “I Speak To God In Public,” and was immediately struck with the thought, “I need to read what this guy writes.”)

So, I’m just gonna dump some quotes from the book here, without commentary…

When we meet these people—some living, some through history and art—things begin to change. Something is let loose. When we’re exposed to the liveliness of holding everything up to the  light of good questions—what I call “sacred questioning”—we discover that redemption is creeping into the way we think, believe, and see the world.

I eventually came to suspect that any God who is nervous, defensive, or angry in the face of questions is a false god. I began to realize that I often ascribed to God the traits of people who are ill at ease, anxious, and occasionally hateful and who even presume from time to time to speak on God’s behalf.

Religion is born out of questions, not answers. Only a twisted, unimaginative mind-set resists awe in favor of self-satisfied certainty.

We often call such a mind-set “fundamentalist,” but we might simply call it “bad religion.” And for the sake of humility—a characteristic crucial to sacred questioning—we might do well to confess that we’re capable at any moment of such bad religion ourselves. We’re capable of reducing other people to cartoon character or caricature. We tend to be unwilling to treat what we perceive as the opposition in a proper manner. Instead of dealing with others with a sense of graciousness and fair-mindedness, we devalue them in the very ways we fear they devalue us.

This refusal to question, listen, and to think past a certain point has tragic consequences, easily discerned in the morning headlines. Self-described people of God are wreaking havoc in our world. They revere their own faith, but their irreverence for the faith of others is the loudest in the room.

Sacred questioning (and the reverence that generates such questions) makes witness to God possible. Without reverence, there is no witness.

Redemptive skepticism is a religious commitment to avoid being swept up by bad ideas, especially ones that wear a godly guise and demand absolute, unquestioning allegiance. Sometimes you have to lose your religion to find it.

Of course, when religion won’t tolerate questions, objections, or differences of opinion and all it can do is threaten excommunication, violence, and hellfire, it has an unfortunate habit of producing some of the most hateful people ever to walk the earth.

Blaise Pascal once observed that one never practices evil so completely and with such cheer as one does when motivated by religious conviction.

But if we can’t talk about the ideas and motivations behind observable behavior (read religion), what is there to talk about? There are so many ways to shut down conversation and frustrate human connection, so many ways to miss each other. This break in communication serves only to maintain the cartoon realities, the caricatures, the stereotypes, and the untruths. How might we stumble on an alternative space? Where’s the candor?

Where do we find people who are really talking to each other?

We only receive art when we let it call our own lives into question. If the words of Jesus of Nazareth, for instance, strike us as comfortable and perfectly in tune with our own confident common sense, our likes and dislikes, our budgets, and our actions toward strangers and foreigners, then receiving the words of Jesus is probably not what we’re doing. We may quote a verse, put it in a PowerPoint presentation, or even intone it loudly with an emotional, choked-up quiver, but if it doesn’t scandal or bother us, challenging our already-made-up minds, we aren’t really receiving it.

It should be obvious that our sense of what is sacred is tragically deficient if it remains closed to all but the most familiar people, places, and ideas.

If we aren’t reaching toward a fresh understanding of the world through the questions we ask, we remain pretty well zombified in the cold comfort of a dead religiosity.

Fresh questions and new acts of imagination are our primary means to encounter love and liveliness, to discover integrity and authenticity. Without them, we’re pretty well done for. We have to exercise and exorcise our imagination with questions.

I will only add this: Let us not forsake the possibility of mindfulness, a commitment to submit everything we’re up to, at work and play, to the discipline of sacred questioning. I understand the temptation to leave well enough alone… but if, in the name of maintaining what feels like an emotional equilibrium, we lose the habit of asking ourselves hard questions about our everyday practices and the worlds we fund and perpetuate with our lives, our religion becomes little more than a dim-witted maintenance of the status quo. We develop a resistance to anything and anyone who calls our lives into question.

We need to remember that a fanatic is someone who can’t change his mind and won’t change the subject.

We ought to seek out the company and conversation of folks who’ll dare disagree with us, people who will tell us (perhaps with our encouragement) when they think we’re wrong, confused, or hateful. The risk of feeling offended comes with the territory. It’s worth it.

When we refuse to take the risk, we develop a built-in resistance to any information that refuses to fall in line with our preconceived notions.

We might already be way past the point where someone has the nerve, the optimism, or the mad hope to dare to disagree with us. Have we lost the habit, the skill of listening for anything more than a breath or a pause so we can jump back in with our own argument?

Are we listening, or are we planning a response? Can anybody get through to us?

We can live, if we choose to, with a kind of Styrofoam casing around our imaginations, an informational echo chamber. We can and do surround ourselves with people who think the same things we think, people who won’t challenge us, and people who’ve learned to avoid certain topics while in our presence. It’s a natural, understandable, deeply human need to have our thoughts and opinions mirrored to us in verbal exchanges. We all need positive reinforcement.

But if we feel deep affection only for people who tell us we’re right and only give high fives to the like-minded, all we’ve done is joined a club.

We risk becoming incapable of the give-and-take of genuine conversation. If all our friends and news sources require of us is a “Ditto” and “I think what you think,” we might be in danger of becoming impenetrable to wisdom, immunized against the sensation of sympathy, resistant to the pleasure of being amused by our own ignorance, and closed to the joy of being wrong.

We seek out and even pay for our own hypnosis. Via television, radio, the Internet, and print, we receive our news product, fashioned and delivered by people who tidy up reality for us. If it isn’t sufficiently tidied up, prepackaged and shrink-wrapped to get our fearfulness, if our minds don’t click into place quickly enough to satisfy our stunted attention spans, we change the channel or move to another site. We move swiftly from scenes that might call into question our exclusively saved, right-thinking status.

When we go public with our convictions and opinions, are we up for counter testimony? Or have we developed a habit of rendering hasty verdicts? Do we find some people inadmissible? Have we made space in our heads for a wide variety of hearts and minds?

Do we want fellowship or submission? Do we remain capable of conversation?

Perhaps our big ideas (religious, economic, political) take a murderous turn when we think they’re more important than people’s lives—the lives of those who aren’t convinced of the rightness of whatever it is we get all trembly about. When we’re ready to hurt someone, if only in our minds, for not getting in line with what we take to be our values, we ned a gadfly (a Socrates, a Jesus, a Stephen Colbert) to make fun of our vanity, our arrogance, and our pretensions toward Godlikeness.

We need the freedom of people talking. Disagreeing agreeably. Everybody and everyone. To the limit. We get to try to see straight and think straight together. We get to ask all kinds of questions—especially open-ended ones.

An open-ended question is often the beginning of a relationship, and without relationship, there is no witness. Witness will involve something profoundly antithetical to the madness of offendedness. It will be the opposite of a stacked deck. Fordham University philosophy professor Merold Westphal puts the matter rather beautifully:

“If I am a good listener, I don’t interrupt the other or plan my own next speech while pretending to be listening. I try to hear what is said, but I listen just as hard for what is not said and for what is said between the lines. I am not in a hurry, for there is no pre-appointed destination for the conversation. There is no need to get there, for we are already here; and in this present I am able to be fully present to the one who speaks. The speaker is not an object to be categorized or manipulated, but a subject whose life situation is enough like my own that I can understand in spite of the differences between us. If I am a good listener, what we have in common will be more important than what we have in conflict.”

“In the end,” Thomas Merton assures us, “it is the reality of personal relationships that saves everything.” And the reality comes unto us when we cast aside our categorizing impulses and our armored suits of offendedness (powerful feelings though they may be) and enter into the dangerous and redeeming space where people, all kinds of people, enter into the blessed work of actually listening to one another.

…enter into the blessed work of actually listening to one another. 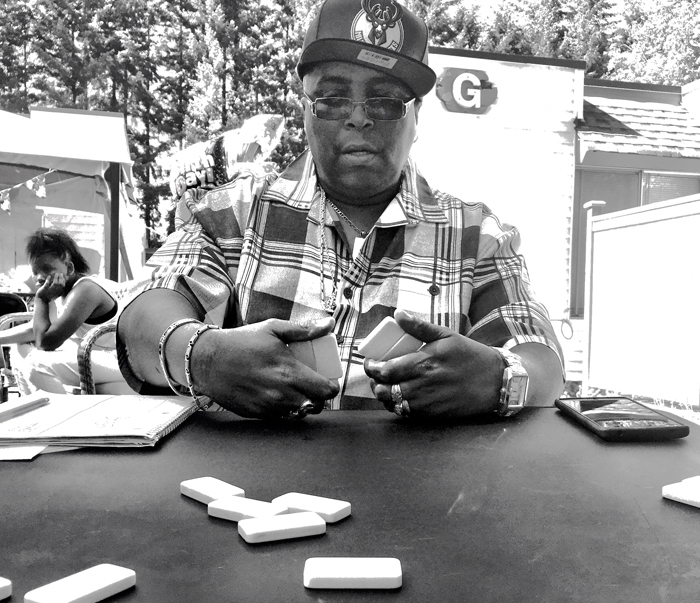 2 Comments to Are We Big Enough For Questions? Do We Remain Capable Of Conversation?