His point was that even when we feel unable, unqualified, and unsure of ourselves, God wants us to be willing to offer what we have.

In groups, we shared our own stories of being stretched and challenged. And we talked about what we think God might be asking us to offer for God’s use.

I’m reading a book called Get Weird by C.J. Casciotta…

Your weirdness is your worth. It’s the value you bring to the universe simply by breathing air with a set of lungs no one else has ever used before.

Yesterday I went up to take the Eucharist at church. There are a lot of religious traditions I don’t understand, but there’s something about taking a piece of bread and a sip of wine that reminds me of the strange truth that my sustenance as well as my joy aren’t found in the things I strive for, but gifts I need only stretch out my hands to receive.

As I was walking up with my wife and daughter to receive these gifts, I heard a thin, scratchy sound coming from the east corner, where the musicians collect to play. My first reaction was of honest and, admittedly, slightly annoyed surprise.

We attend a church in Nashville that hosts some of the most incredible musicians in the entire world. The people who usually perform during our church services have written songs that have won Grammys, for goodness’ sake! Why was I all of a sudden hearing squeaks and scratches?

As the sound continued, I realized it belonged to a violin. The song it was timidly trying to scrape out? Leonard Cohen’s “Hallelujah.”

Well, now I had to  investigate. This is quite possibly one of the most beautiful songs of the past century, if not all of history. Who was defacing it? And during the Eucharist no less?

Jesus would not be happy.

I glanced over at the musicians’ corner and noticed that the violin’s player was a girl who couldn’t have been more than eleven or twelve years old.

It’s quite amazing how quickly our cynicism transforms into empathy once we see a face.

All of a sudden, what my ears had found irritating just seconds ago was now beautiful when paired with what my eyes saw. Here was this child playing the “secret chord,” opening a window into the kind of universe this ancient ritual I was about to partake in was symbolizing, a universe where what sounds strange and unfinished is the very thing that pleases the Divine.

Her song was my entire week that led up to that morning. It was all the muddy thoughts and words I wish I could white out, all the misses and “didn’t measure up” moments, all the rejection and feelings of failure I brought with me to the table, hands open, mouth open, just trying to scratch out a broken hallelujah.

Her honest, sincere performance truly suggested the supernatural. It was everything she had, uncommonly courageous in a room full of musical experts, echoing Christ’s words in the gospel of Saint Matthew:

Our attempts to live out of our true selves, our Sacred Weird, often seem to present themselves as squeaks and scratches, bruises and blemishes.

But if there’s one thing I love about the Eucharist, it’s the same thing every kid knows after a long hard day on the playground: that our scrapes and scars are what make us sacred.

There are no failures to a child who hasn’t yet gotten the weird kicked out of her. There are simply experiments, an infinite universe of what-ifs to be explored. She is a glad scientist. Life is a laboratory for her. Her scraped knees and imperfect scribbles are simply evidence of an adventure worth taking.

Our weird scratching and squeaking, our rough sketches and storyboarding, our awkward pauses, and even our total air balls… they’re all a hallelujah (or “God be praised”).

They’re the secret chords that evoke the Sacred Weird and send us into a future where the childish, lowly, and forgotten lost causes, once left for dead, come back to life stronger than anyone could’ve ever imagined.

Well, any grown-up at least.

At YOUTH on Wednesday, Bailey led worship. She’s the one in the picture on stage with bare feet.

She’s been singing for a long time. But leading is different. It’s scary and stretching.

At one point, she spoke to the audience before the next song. What she said was so full of depth and honesty and trust in God’s goodness. It was prophetic. It was powerful. It was a holy moment.

She took a risk. And I’m so glad she did.

God is looking for people who are willing to offer what they have.

After YOUTH service, Dominque (pictured below, with the big smile) told me she wants to be a photographer for the church. I smiled and said, “OK. You start next week.” 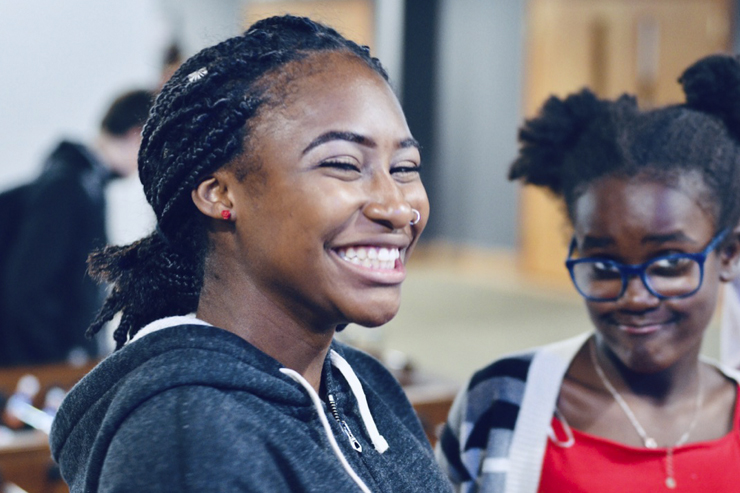 Humility consists in being precisely the person you actually are before God, and since no two people are alike, if you have the humility to be yourself you will not be like anyone else in the universe. —Merton

2 Comments to Just Trying To Scratch Out A Broken Hallelujah