Pigeon friend of mine, fly on, sing on. —Carl Sandburg

Last weekend in Maple Valley my family and I walked from the farmer’s market back home – through a neighborhood – and while we were walking, I could hear a distinct sound. One we’ve all probably heard before. It wasn’t loud, but it was present.

Like a subtle soundtrack. Music to set the scene. And yet it seemed unusual. A bit out of place or context. For a moment I tried to place the sound. And then I realized what it was…

The gentle cooing of doves.

Which did seem odd to me. Are there doves here?

My last experience with doves was in Italy. We stayed in a stone farmhouse built in the 1500’s set among olive orchards. The old lady who owned it, Phyllis, had 2 or 3 doves that lived in a little hole in the stone work near the peak of the roof… 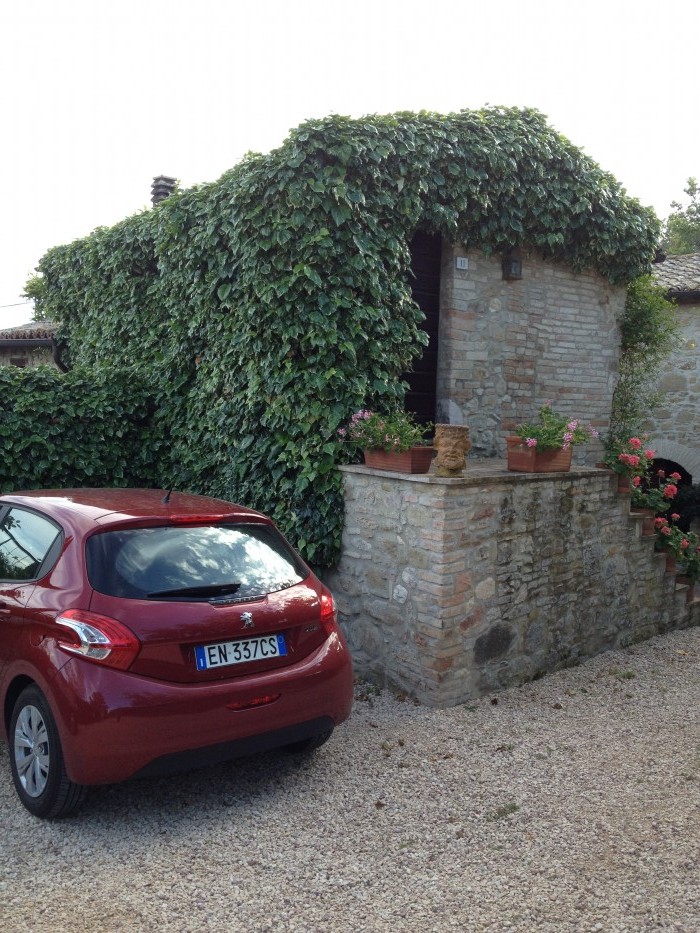 Anyway, back to Maple Valley—I looked around for doves but didn’t see any. Then I scanned the rooflines of the homes in the neighborhood. It all came together…

There were pigeons—maybe 40 or 50 or even more of them.

It surprised me. I don’t usually think of pigeons as hanging out in Maple Valley. My first thought about where pigeons hang out is a city park. Pioneer Square in Seattle.

Like this picture of Geraldine Peterson AKA “The Bird Lady” taken in Pioneer Square around 1980. 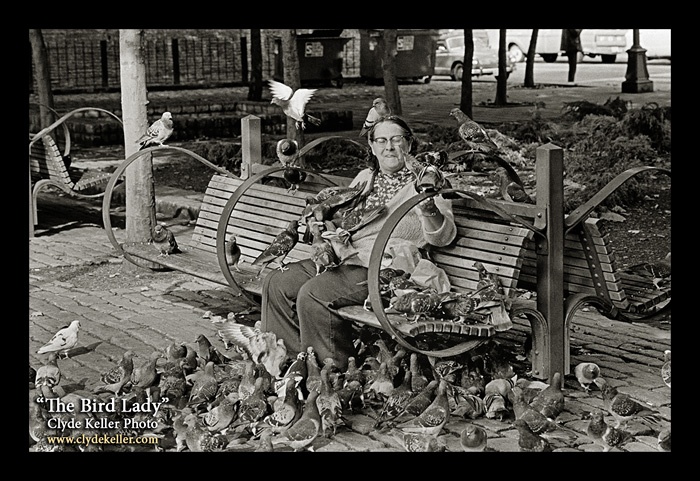 But in Maple Valley? Weird.

My wife loves birds so I had bought her this book, “Consider the Birds.” She didn’t read it for months after I gave it to her, so I took it and read it. And surprisingly, I absolutely loved it.

Here’s an intriguing section from the book…

The very first story in the Bible includes birds. In Genesis 1, God says, “Let birds fly,” and “Let the birds multiply.” But even before God creates the birds, the Spirit of God hovers over the face of the deep—the ancient rabbis suggest—like a bird. The Hebrew writings even specifies what kind of bird—a dove. “The Spirit of God hovered over the surface of the waters—like a dove.” Not a pterodactyl or the humongous forbidding birds found in many creation myths, but a gentle, quiet, friendly thing. It’s surprising.

It is not difficult information to uncover, nevertheless, I was surprised to find that a dove is, in fact, a pigeon by another name. Pigeon is from the French pijion, and dove is an English word.

There are a great variety of birds English speakers call either pigeons or doves—which are all part of the same family. We tend to call the more delicate and smaller members of the family “doves” but the names are interchangeable.

This information is hard to absorb. How could a pigeon command creation? The rabbis have wild imaginations. Still, I like the image quite a bit… the Spirit of God—like a pigeon.

Once we get to the baptism of Jesus, the text is explicit. Here the Spirit shows up, and this time each of the Gospel writers is clear: LIKE A DOVE.

John the Baptist says, “I saw the Spirit descend as a dove from heaven, and it remained on him.” This, says John, is how he knows he should believe in Jesus.

A dove is a pigeon. That seems worth saying repeatedly. We may have imagined the dove at the baptism was white, but it was more likely grey, with an iridescent green-and-violet neck… a “rock dove” which is very common in Palestine and which is considered to be the ancestor of our common domestic pigeon.

The common domestic pigeon—the kind that gathers in our parks, nests in our eaves, poops all over our buildings and sidewalks.

The rock pigeons found in our cities and barns are probably from populations established by escaped domestic pigeons. They are often referred to as feral pigeons. How is that for a symbol of the Holy Spirit? I believe it’s a good one. I like it…

This kind of pigeon is everywhere, on the streets.

The white dove is overused. How about pigeons for Pentecost, on banners and bulletin covers? There are lots of birds that want to avoid us, who are afraid of us, who want their space. You could call them unfriendly.

Pigeons want to be close to us.

They are where we are—in some of the worst places we have made (neglected projects, abandoned buildings) and some of the best (art museums, parks, Rome’s piazzas). They won’t leave us alone.

What if the Spirit of God descends like a pigeon, somehow—always underfoot, routinely ignored, and often despised? The Spirit of God is among us, the Holy Spirit, and we often don’t even notice.

Maybe it’s because we are looking for something cute and white, but the Spirit is more complicated than that—fuller, and richer, and everywhere.

Not only was I aware of pigeons in Seattle in the 80’s, but I was also becoming aware of music. This was the time in my life when I was beginning to have my own interests in music. Up until this point, we mostly listened to my parents’ music… 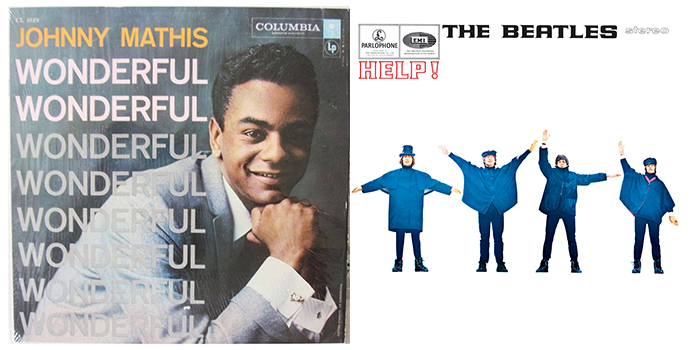 But I was hearing music in the neighborhood and at school. 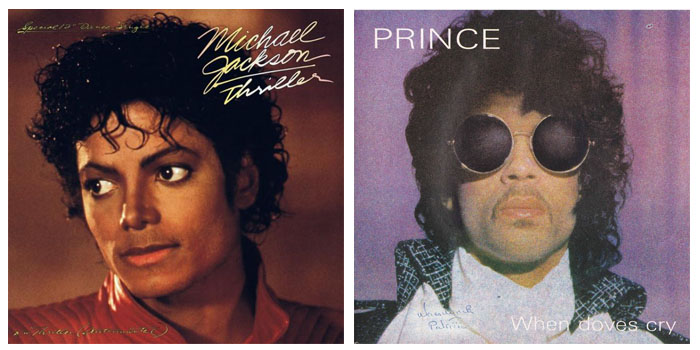 There was something about Prince’s song “When Doves Cry” that resonated. I wasn’t even sure what it all meant, but it seemed to speak of the pain experienced in relationships, of break-up, of tears….

“How can you just leave me standing?

Alone in a world that’s so cold?

Why do we scream at each other

It’s so visceral, relatable, universal. We have felt this. Lived it.

But do doves cry? Or pigeons for that matter?

I read an article that claimed Prince was right. Doves can cry. Then it goes on to explain how birds, and doves specifically, can and do produce tears. But then it says there’s no way to know if birds produce tears because of grief.

The scientist quoted in the article moves on to the issue of whether or not they make a sound when crying… “As for a sound, I suspect that grieving doves—if they do grieve—probably produce tears silently.”

Well, it’s kinda poetic. What does it sound like when doves cry? Silence.

Zephaniah 3.17 says, “The Lord rejoices over you with singing.”

How cool is that? You make God sing. And it’s a song of joy, God is rejoicing over you. With song.

This is all He needs to sing.

And yet, I wonder if we sometimes elicit greater songs of joy, of shouts and raucous celebration?

Like when we live how Jesus taught us to live.

When we live generously

When we live without fear

When we live peacefully

When we welcome others

When we contribute to life – to the flourishing of all lives.

I like to imagine this brings the song of the Spirit to that special place… you know how songs do – hitting that crescendo. Or in more modern music: we call it the drop. You know, the boom.

So if God sings, does God also cry?

And you, Jeremiah, will say this to them: My eyes pour out tears. Day and night, the tears never quit.

My dear, dear people are battered and bruised, hopelessly and cruelly wounded. I walk out into the fields, shocked by the killing fields strewn with corpses.

I walk into the city, shocked by the sight of starving bodies. And I watch the preachers and priests going about their business as if nothing’s happened!

This is God telling the prophet Jeremiah what to say…

“My eyes pour out tears. Day and night, the tears never quit…”

It would seem the answer to the question is yes.
God cries.

Remember in the Gospels when Jesus finally arrived at Mary and Martha’s place… their brother Lazarus had been sick and then died. When He entered the place, he felt the grief they were experiencing. He shared in their Grief.

What is it that causes God to cry?

Well, I believe all that trends toward death and destruction grieves the Holy Spirit.

So in Genesis chapter 6, when it says the Lord saw that the wickedness of humankind was great in the earth, and it grieved Him…. I think we can safely say, Yes. God cried.

And in Europe during the crusades, Christian soldiers enroute to the Holy Land slaughtered Jews on the way. Some were herded into their synagogues. Cries of anguish rose to the heavens as these wooden buildings were torched.

In Europe between 1204-1799 when Protestant blood flowed freely in Roman Catholic countries. The victims of this so-called “Holy Inquisition” totaled in the millions.

In the Christian world of 1490-1850, over 20 million black Africans were killed in the middle passage on the way to slave markets for purchase white Christians.

In Europe between 1941-1945, 6 million Jews were hunted, hounded, driven out, butchered, gassed, and burned in the Holocaust.

In Hiroshima on August 6, 1945, a single atomic bomb claimed the lives of 129,558 victims and it terrified the world.

In the world between 1914-1996, over 175 million were killed as the result of insane policies of their own governments.

On June 12 2016, Omar Mateen entered a gay nightclub in Orlando and began shooting. 49 died and 53 were injured.

On July 5 2016, Alton Sterling was shot and killed by police on the ground outside of a convenience store.

The next day, July 6 2016, Philander Castile was shot inside his car by police while his fiancé and her child watched.

The next day, during a peaceful protest in Dallas, a lone gunman situated on a rooftop above shot into the crowd—targeting police officers. 11 officers were shot, 5 killed.

And each day, some 4,100 children will die from diseases caused by contaminated water in third-world countries.

I know this is heavy. Perhaps it should be.

Not every song can be Little Red Corvette. Sometimes we need to hear “When Doves Cry”

Or perhaps you’re more familiar with the old translation: Grieve not the Holy Spirit.

It’s time to stop bringing grief to God’s Holy Spirit; you have been sealed with the Spirit, marked as God’s very own.

Banish bitterness, rage and anger, shouting and slander, and any and all malicious thoughts—all these are poison.

Instead, be kind and compassionate. Graciously forgive one another just as God has forgiven you through Christ Jesus.

All that trends toward death and destruction grieves the Holy Spirit.

The challenge for us is… to be someone who makes the Spirit sing (I don’t want to make doves cry).

Spirit of God you are welcome

Spirit, as a dove, descending, hovering

You ride upon the wings of wind

You sing with joy over your people—and all living things

Where there is life, you sing

You delight in all that is made

Your song is the sound of beauty

Of mystery, wonder, and creativity

For you are the Creative One

We welcome your song

Move us with your inspired sound

Move us from death to life

Move us from fear toward faith

Move us from violence toward making peace

Move us from greed toward generosity

Move us from isolation into the beloved community

Move us from hate to love

Holy Spirit of God, we pray

Move us with your song

As you sing over us