One of my all-time favorite movies is 1986′s The Mission starring Jeremy Irons, Robert De Niro, and Liam Neeson. The soundtrack, by Ennio Morricone is haunting and beautiful.

Rodrigo Mendoza (Robert De Niro) is a former slave trader seeking atonement for the sin of killing his younger brother after challenging him to a duel in a fit of jealous rage over a woman. Although the duel makes the murder technically honorable in the eyes of the law, Rodrigo chooses to become a Jesuit living in a cell – believing there is no forgiveness for his sin.

When Father Gabriel (Jeremy Irons) visits him, he persuades Rodrigo to leave his cell of isolation:

Rodrigo’s penance is to carry the burden of his past as a mercenary and slave trader in the material form of his armor and weapons up the Iguazu Falls to the Guarani people whom he had sought to enslave.

When he reaches the top of the falls, the Guarani recognize him as the man who once hunted them. When one draws his knife and holds it ominously in front of Rodrigo’s throat, he seems prepared to enact revenge, but instead he cuts the rope and throws Rodrigo’s burden into the river.

At that moment, Rodrigo finally lets go his guilt in a stream of tears. 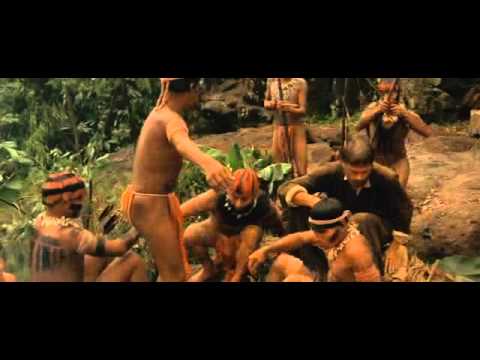 The Iguazu River scene fills Rodrigo’s ordeal with more significance than just penance. Penance is a physical expression of true sorrow and regret – and Rodrigo has already subjected himself to such punishment.

Now, he must overcome his self-directed anger that prevents him from asking for forgiveness.

What Rodrigo lacked was hope – an openness to new relationships and the possibility of joy. This is what the river scene makes possible. At the top of the falls, he enters into the world of the Guarani who participate in the process of his forgiveness.

The river and its people symbolically enact forgiveness by releasing Rodrigo from his burden.

Rodrigo, through his climb up the falls, humbles himself and takes the form of a slave – making the act of reconciliation possible. The river becomes Rodrigo’s baptismal waters that not only carry away his sin, but from which he also emerges as a new creation.

The Guarani man who cut Rodrigo free from his burden of guilt and regret did what, I believe, we are all called to do…

Ease burdens and lighten the load – as agents of redemption and reconciliation.

Jesus criticized the religious experts of His day, saying, “For you crush people with unbearable religious demands, and you never lift a finger to ease the burden.” —Luke 11.46

For the most part, we will not encounter people like Rodrigo who are carrying around a literal burden – a net full of heavy armor and weapons of death and destruction. But in a more figurative sense, we do encounter Rodrigo on a daily basis…

Individuals who are weary and carrying heavy burdens.

People without hope of redemption.

Men who live with crippling regret and self-hatred.

Women who cannot forgive themselves.

People who are punishing themselves for what they have done – and believe that not even God can release them from their guilt and isolation.

So here’s my question…

What does lifting a finger to ease their burden look like?

How can we be like the Guarani man who cut Rodrigo’s rope and set him free?

4 Comments to What Does Lifting A Finger To Ease Their Burden Look Like?