*picture above: Barry (left) and Don (right) at church together last night

Cops, convicted felons, communion, and church… these concepts might, at first glance, seem like they are worlds apart, but if we pause and think about it long enough, we’ll see how beautifully they go together.

Barry shared his story at church last night. He committed a violent crime when he was 13 years old, was sentenced to die in jail – life without the possibility of parole. The youngest in our country to ever receive this sentence, Barry was placed in a Washington state adult prison at the age of 15. It is a miracle that he is out today. Because of the work of Bryan Stevenson and the Equal Justice Initiative, the laws have been changed making life without parole sentences no longer possible for children.

After serving 29 years in prison, Barry Massey was released because of these new reforms. He has never stepped foot inside a high school, and has never driven a car, having spent his teens, twenties, and thirties behind prison walls.

Don, a Seattle police officer who attends our church, was also at the service last night.

Although we are many, we are one in Christ and we belong to one another. —Romans 12.5

The way we’ve been talking about this at our church is kinship.

D.A. Carson, in his book Love in Hard Places, says, “Ideally, however, the church is not made up of natural ‘friends.’ It is made up of natural enemies. What binds us together is not common education, common race, common income levels, common politics, common nationality, common accents, common jobs, or anything of the sort. Christians come together, not because they form a natural collocation, but because they have been saved by Jesus Christ and owe him a common allegiance. In the light of this common allegiance, in the light of the fact that they have all been loved by Jesus himself, they commit themselves to doing what he says—and he commands them to love one another.”

In this light, they (the church) are a band of natural enemies who love one another for Jesus’ sake.

In Nora Gallagher’s book The Sacred Meal, she writes…

“Communion is… a communal activity. Communion is meant to be done together; it has to be done in community. You can pray alone and fast alone. You can even go on pilgrimage alone. But you can’t take communion alone. More than any other practice, taking communion forces us to be with others, to stand with them… or kneel… or pass a tray of grape juice and cubes of bread. We are forced to be with strangers and people we don’t like, persons of different colors and those with bad breath or breathing cheap alcohol. It forces ‘them’ to be with ‘us’ and us to be with them.”

Communion is, more than any other practice, a humbling experience. We are stuck with each other, at that altar, for at least a few minutes.

“I remember quite keenly the Sunday morning I stood up from my pew and marched toward the altar without really paying attention to who was with me in the line. I think I was imagining a new haircut or the perfect apartment in New York, my two favorite fantasies. When I got to the altar and took my place… my knuckles knocked against those of a person standing right next to me. When I glanced over, I saw a woman I was not speaking to. We both gave a little start, and I felt immediate shame. I could remember exactly why we were not talking and everything she had done to cause it; but I realized, as I stood there with about an inch of ice-cold space between us, that I had done exactly nothing to make things even the smallest bit better. Ha! the Spirit must be saying over us. Let’s see what happens now.”

“In a world of gated communities and single cars and large houses, it’s not easy to find yourself next to someone you dislike. We used to run into everyone in the whole village just about every day—at the well, in the fields, or even asleep right next to you in a big, warm pile of bodies. I am grateful for the amount of privacy our greater wealth gives us, but it comes at a price.”

“Every effort to make amends has to be so self-conscious, so planned, that it’s almost impossible for any animal as proud as we are. It’s almost easier, I saw that day, to have your nemesis foisted on you. At least, at a minimum, you’ll get used to her smell.”

A.J. Swoboda says, “True community, at least in the Bible, is found in a place where you are forced to have to learn to love people you normally wouldn’t love.” 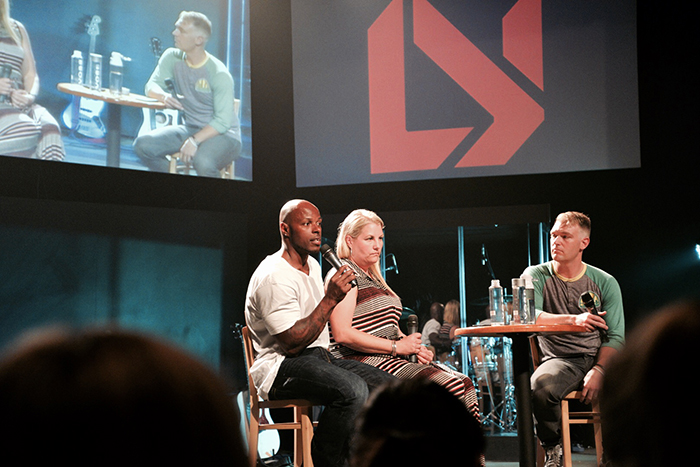